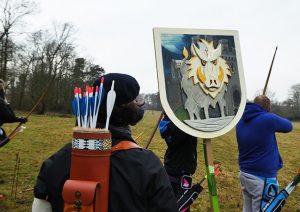 “During the two years since I was first introduced to the recurve bow at a Lintman beginner course, I’ve been taking an increasing interest in traditional archery, especially with the longbow.

So, when I found the Fraternity of St George on the internet, and I saw that they welcomed archers for training / open shoot days, it was only a matter of time before I would make contact and join them for a shoot.

So, on a Saturday morning in early March I found myself on the Yattendon Park estate, near Thatcham, being sized up for a longbow to borrow for the day.

The Fraternity of St George is a wonderful, welcoming bunch of people from all walks of life and all parts of Europe, who gather together to shoot traditional style shoots on some of our loveliest estates.

The morning was spent becoming acquainted with the longbow, during a personal instruction session led by Brian Mooyaart, the driving force behind the Fraternity. Transferring skills from the recurve to the longbow was pretty straightforward – shooting well with a longbow is of course a different matter!

In the afternoon I participated in ‘shooting at the marks’. This is a typical longbow shoot. The targets were not the bosses and faces that we’re familiar with, but stakes with painted signs on them, which had been set out across the estate beforehand. Shooting at the marks faithfully reproduces the disciplines that all Englishmen used to have to practice – basically training to rain arrows down on foreign soldiers.

Once the entire row of archers had fired their three arrows at the distant mark, we walked up to see how we’d done. A piece of cord marked off at different lengths is walked in a circle around the mark – basically it would be a concentric circle target if viewed from directly above. Once the scoring was complete, we’d be shown the next mark. Some were very distant, some were uphill, some downhill, some unsighted and many were behind groups of mature oaks. Thus, the skill of the archer was in judging distance, and choosing a trajectory that would clear any obstacles in the way. We were always on the move, covering quite a large part of the estate during the shoot.

The links between this archery discipline and history are many and fascinating (if that’s your thing)! Modern artillery such as mortars still judge a ‘hit’ to be anywhere within 18 feet of the target… that’s three longbow lengths. One longbow discipline involves loosing as many accurate arrows as possible within 30 seconds. It’s 30 seconds because that’s how long it takes a charging cavalry officer between coming into range and being close enough to spear you with his lance. 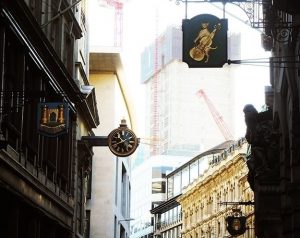 If you walk up Lombard Street in the City, you see a couple of what look like pub signs- they are in fact original marks that have been hung there because that area used to be a big archery range….. the historical gems just keep coming!

By the end of the day I’d had a really great walk in lovely countryside, I’d had a lot of fun doing some quite challenging archery, I’d met very interesting people from all over England, France, Belgium and Sweden – and I’d had a terrific time.

The Fraternity organises quite a few shoots during the year – mainly in the home counties. If you don’t own a bow, they will happily rent one to you for the day and their instruction is very good.

When I contacted them, they were very friendly and excited to be talking to a new potential member. You can get more information from : www.longbow-archers.com/fraternity ”

The photographs are reproduced with permission © Fraternity of St George.

END_OF_DOCUMENT_TOKEN_TO_BE_REPLACED 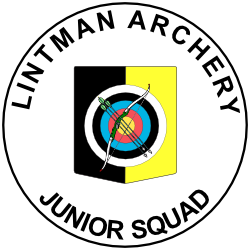