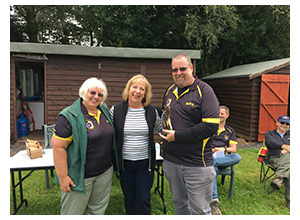 At the Club AGM on Sunday 18 September we were joined by Jane Anscombe to present the first Tony Anscombe Award to Pat and Mark Beaumont.

The award is named after Jane’s husband Tony, a long standing Club and Committee member who died earlier this year. Tony was well known to members not only as a regular archer, but also for maintaining the Club field for a number of years.

This new award will be awarded each year to the Club member(s) outside the Committee who have contributed the most to support the running of the Club and Club events.

This years winner Pat and Mark Beaumont have been members for over 8 years, and previously served on the Committee before standing down in 2015. During the last year they have continued to offer their time an support to the Club and are worthy first winners of the award.