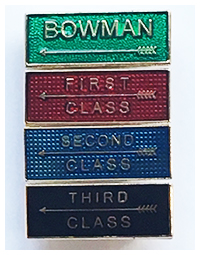 The final archer classifications for 2016 have been published and are available on the Club Records and Handicaps page.

Also updated are the Club Records, the year end outdoor handicaps and the starting handicaps and classifications for the 2017 season.

We have made a change to the recognised Bow categories in our records to align with the Archery GB bow definitions. The previous ‘Primative’ bow class has been reclassified as ‘Flight’ bow. Flight bows include horse bows, flat bows and other simple bow types. The Club now recognises the following bow types for records purposes:-

Please note that starting handicaps and classifications for the new season may be different from the previous year end position. At the start of each season classifications and handicaps are reassessed based on the three best qualifying scores of the previous season. During the season handicaps are reduced on a rolling basis as the average of the current handicap and latest score. This means that the year end handicap is influenced by the sequence of scores shot through the season and the starting handicap brought forward from the previous year.

If you have any queries on your own classification or handicap please speak to or email our Records Officer, Lindsey Roberts (email: records@lintmanarchery.org ).